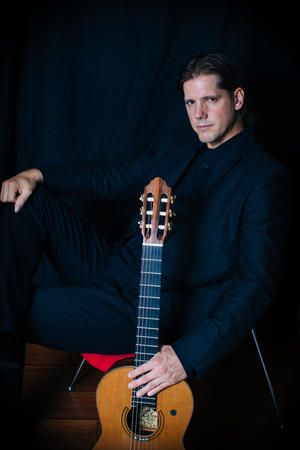 "Virtuosismo" and "technical dominance" are the words used by the press to describe American guitarist, Jay Kacherski.  A native of New York, Kacherski has given solo performances and master classes throughout the United States and Mexico at music venues such as the Festival Internacional de Guitarra del Conservatorio Nacional de Musica, Mexico City; the New Orleans International Guitar Festival, the Ollin Yoliztli Center for the Arts in Mexico City; and the Concert Artist Series at the Atlas Performing Arts Center in Washington D.C. As a member of the Texas Guitar Quartet, he has given performances and master classes at the Brevard Music Center, the Texas Guitar Workshop, the Florida Guitar Foundation in Miami, and at various universities and concert series throughout the United States and abroad including a six city tour of China.

In 2007, Jay Kacherski was a member of the guitar faculty at the Escuela Nacional de Música, the music conservatory for the National University of Mexico (the Universidad Nacional Autonoma de México, UNAM). In 2008, he returned to Mexico as a Fulbright Scholar researching, performing, and promoting contemporary classical guitar music of Mexico. His guide and teacher for his Fulbright work was the world-renowned Mexican guitarist Juan Carlos Laguna. Since then, he has been premiering many new Mexican guitar works (both solo and chamber) in the United States and has created the first ever complete catalog of Mexican guitar works on the internet with links to videos, audio, scores, and more.  It is called the MGMC—the Mexican Guitar Music Catalog, and is available at the website www.kacherskiguitar.com.

Jay Kacherski is on the guitar faculty at Loyola University, the University of New Orleans, and McNeese State University, as well as NOCCA, the New Orleans Center for Creative Arts. He is an Associate Editor for Soundboard Magazine, the director of the Francis G. Bulber Youth Orchestra Guitar Program, a reviewer for the American String Teacher Journal, and Artistic Director of the "Classical Minds" International Guitar Festival in Houston, Texas.

Kacherski completed his Doctor of Musical Arts degree in Classical Guitar Performance from the University of Texas at Austin with professor Adam Holzman. Prior to that, he earned a Master’s Degree in Guitar Performance and Literature from the Eastman School of Music where he studied with Dr. Nicholas Goluses. He completed his undergraduate studies with Pepe Romero protégé Dr. Mark Switzer and Eddie Lugo at Florida Southern College where he graduated with honors. Jay has also been a performer in master classes with classical guitar icons Manuel Barrueco, Sharon Isbin, Kazuhito Yamashita, Eliot Fisk, and the Los Angeles Guitar Quartet among others. 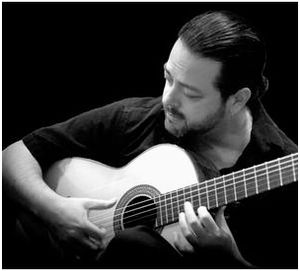 Jeremy García is a classically trained guitarist and noted composer who successfully transitioned to flamenco. As Associate Artistic Director of the Houston Classical Guitar Festival, he works with the Artistic Director and Education Director in the planning of each festival, including selection of guest artists and festival programming. At the festival he has conducted many workshops in composition and flamenco technique. He performs often as a soloist and with Solero Flamenco for festival and preview concerts.

García and singer Irma LaPaloma cofounded the renowned Solero Flamenco, Houston’s premier flamenco performance company.  Together and with many locally and internationally recognized artists, they have wowed audiences throughout the United States.

García and LaPaloma were recently honored to participate in a project for Houston Grand Opera, Suite Española: Explorando Ibéria, created by HGO Artistic Advisor Ana María Martínez, one of the greatest sopranos of our time. The concert celebrates the music of Spain, including the art form known as zarzuela, or Spanish musical theater, by featuring a collage of selections from the repertoire’s most beautiful pieces. García, guitarist for the production, accompanied Martinez and played his arrangement of Asturias accompanied by flamenco dancer Manuel Gutierrez Cabello. LaPaloma was choreographer for the production.

In addition to many solo guitar pieces, García also is known for his composition, ”Suite Andaluz,” which evokes the influences of Andalusian folklore in three movements. Composed and arranged for full orchestra with flamenco song, guitar and dance, “Suite Andaluz” was recently performed by Solero Flamenco and the Helena Symphony Orchestra in Montana, as well as by the Brazosport Symphony and Grace Symphony Orchestra in Texas. “Concierto Nuevo Flamenco” is another original concerto he co-composed for two guitars and orchestra. As a soloist, García performed Joaquin Rodrigo’s “Concierto de Aranjuez” with the Helena Symphony (2017), Fort Bend Symphony (2006) and again with the Brazosport Symphony (2007 and 2016). His recordings of original music include Baile del Sol and Distancia

García earned a Bachelor’s degree in Classical Guitar Performance from Texas A&M University - Corpus Christi and a Masters degree from Southern Methodist University in Dallas. As Professor of Music, García founded the guitar program at San Jacinto College that he directed for 20 years. He has an active performance schedule as soloist and with Solero Flamenco, and he is working on new compositions and other innovative projects. (jeremygarcia.net) 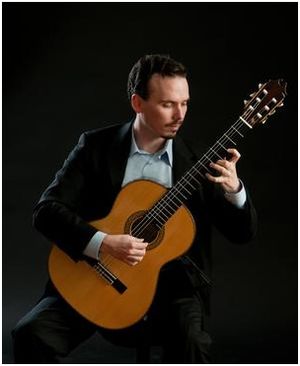 Eddie Healy serves on the Board of Gulf Coast Guitar Association as Education Director of the Houston Classical Guitar Festival & Competition. A prolific composer and concert guitarist, Healy has performed in Spain, Mexico, and the United States. In Mexico he was featured at the 19th Annual International Guitar Festival of Morelia, the 4th Festival Internacional de Guitarra Ramón Noble, and in Spain at the annual 2014 and 2016 ChamberArt Madrid Festival. He and his duet partner, Dr. Brandi Estwick, perform routinely and serve as faculty for the annual ChamberArt Madrid Festival.

His original compositions have been performed by many artists throughout the world and can be heard on his CD, Direction. He has composed the theme to a series of podcasts produced by UTD titled “A Conversation With…”, scores for several video games, and the alma mater for Rogers Middle School in Prosper, Texas. In 2012 Healy released a CD consisting exclusively of his compositions titled, Direction. James Scott of minor7th.com said that the recording “…is a triumph, offering the listener accessible compositions matched by immaculate performances.” He published the sheet music for several of the compositions from Direction with Joachim-Trekel of Hamburg, Germany in 2010 and has nine publications with Les Productions d’OZ to date. Eddie is a member of ASCAP.

Healy is the Coordinator of Guitar and Music Theory Studies at the Eastfield campus of Dallas College in Mesquite, TX and teaches at the Gray School of Music. He directs the Brookhaven-Allegro Guitar Orchestra, a community guitar ensemble in Dallas. Healy is the Assistant Director of the Texas International Guitar Competition & Festival as well as that festival’s youth competition.

He received a Bachelor’s in classical guitar performance at The University of North Texas and completed his Master of Music degree from Southern Methodist University. (www.eddiehealy.com) 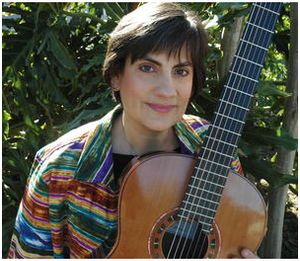 Andrea Cannon is a performer proficient in classical and jazz guitar. An alumna of Berklee College of Music, she studied Jazz Guitar Performance and also received an Outstanding Alumni Service Award. Post-Collegiate studies include Applied Performance in Classical Guitar with Robert Guthrie of Southern Methodist University.

She travels internationally as a clinician and performer in Europe, Central and South America as well as cities throughout the USA and Canada. Cannon has been published in the American Suzuki Journal, Soundboard Magazine and American Music Teacher. She is certified through the Music Teachers National Association and is a Registered Teacher Trainer with the Suzuki Association.

The arts advocacy group Alarte of Guatemala City, Guatemala has created a scholarship in her name. The first recipient of the 'Beca Andrea Cannon' is enjoying the benefits of a new guitar as well as expert Suzuki instruction.

As Outreach Director of the Board of Directors of Houston Classical Guitar Festival & Competition, Cannon is responsible for augmenting guitar programs in the public schools and for sending our guitarists to perform in retirement communities and hospitals. (andreacannon.com) 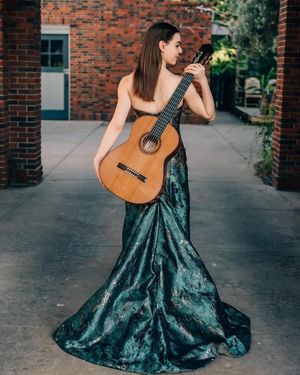 Clara McLain serves as Communications Director and as faculty for the Houston Classical Guitar Festival and Competition, teaching guitar technique to beginning and intermediate students and advertising the Festival and other performances.

She was a featured guest artist and teacher at the Summer Guitar Conservatory, a project of Guitar Initiative, a non-profit organization dedicated to providing free guitar education opportunities for students throughout Houston.  McLain formerly was faculty member at the “Classical Minds” Guitar Festival and Competition when it was in Houston.

McLain attended Brookhaven College, studying with Rodger Bennett, where she performed the Vivaldi Guitar Concerto No. 1 with the Brookhaven College String Ensemble under the direction of Dr. Matson Topper, and where she also received the Alice Jones Berding Award in Music. Clara then transferred to Southern Methodist University, receiving the Honor Transfer, Veritas, and Artistic Scholarships, and where, under the tutelage of Robert Guthrie, she earned her Bachelor of Music in Classical Guitar Performance.  Pre-college, She studied with the acclaimed guitarist and composer David Brandon at Texas Tech University in Lubbock; and privately with Robert Guthrie, Professor of Guitar at Southern Methodist University's renowned Meadows School of the Arts.

McLain currently performs and teaches in the Houston and Galveston areas.